FREE SHIPPING on domestic orders over $100 🚚

Make a splash with a yacht rental from Knot My Boat Charters.

Nothing says “bachelorette party” quite like poppin’ champagne on a yacht. The #1 yacht charter company in the Chicagoland area makes it fun and feasible for your group to spend the day sipping and sailing. Each boat is BYOB, so you can bring the bride's favorite cocktail on board to celebrate as you cruise Chicago. Customize your experience by choosing one of their many vessels. We prefer the 50 foot yacht with luxe finishes and a suped up sound system, but whatever floats your boat!

Chicago Bachelorette Party Guide: What To Do - City Guide Next

Originally we had a trip booked to Miami but due to the tropical storm we had to cancel and being that it was a trip for my friends birthday we opted to go to Chicago since we’d never been.

We also had a yacht booked in Miami, it’s the same yacht company that I’ve used on several occasions so we still wanted to continue on with the yacht plans in Chicago.

Being that plans were literally changed the day before it was difficult to get in contact with several companies. Knot my boat charters initial phone call was very pleasant and the young lady who helped me was very helpful. Although the price was a little higher then what we’d been quoted we opted to go with them.

We understood that we had to hire our own captain but that they would provide a list of them for us.

My friend booked the boat and it was supposed to be the boat that held up to nine people, more of a sports boat. She gave me the task of reaching out to the captains to try and find one that would be available for our date and time given the short notice.

Long story short, captain Colt was the first to reach out and we took his offer. I was too worried that we wouldn’t find one.

Upon arriving to the docks, he immediately stated that he had given us an upgrade on him and we thought wow that is super nice but we did not think that he would hold it over our heads for the entire trip. Stating that it was 4K.

He was asking for a tip upfront and saying things under his breath throughout the night. We had paid the company for 4 hours but told colt we only needed 3, being that it was chilly.

At the beginning of our trip we asked if we could go down the river and he said no because we would not have enough time but then later on he decided that we would.

One of our guests who lives in Chicago wanted to get off to meet her husband at one of the restaurants on the river and he made it such a big deal and said we needed to pay him $100 more. He was very argumentative and just plain unprofessional.

On our way back he was going so fast that we all put our life jackets back on because we felt unsafe. I literally text my husband at that moment to let him know our captains name and what was going on, I felt like we were going to end up in the lake. I feared for my safety and for the safety of my friends.
He got us back half an hour early.

Even after all of that i had downloaded venom to tip him and i had to update my card and let him know that i had just downloaded it, he said under his breath, i won’t hold my breath. I’m like the freaking nerve of this guy!

He almost seemed bipolar or like he was on some hard drugs, he would be nice and then rude. He almost through off our moods but we continued trying to have fun.

The “upgraded boat” reeked of what seemed to be throw up, it was so funky and dirty. The bathroom had a mop and broom in it, as it was used for storage. Things were still in the fridge from a previous group, most definitely didn’t seem to be sanitized which is so important right now due to Covid.

The worst charter rental experience ever!

This captain was a very POOR REPRESENTATION FOR WHAT my EXPECTATIONS from what seemed to be a reputable yacht charter company.
I definitely recommend to never book captain colt if they continue to use him and would be very leery of booking with this company based on the people that they recommend to their customers.

Mind you I’ve been trying to call and no one has answered but they offered my friend $200. What a joke!

As a business owner I will use this experience in my next training. 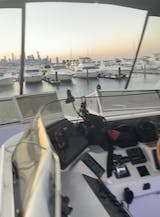 Heading to Chicago for your bachelorette party? We've rounded up our favorite bachelorette themes, gifts favors and accessories for a weekend in the windy city. Let's Get Nauti DIY Balloon Garland Kit
No reviews
From $8.00 SUPER TALL Let's Get Nauti Banner (2x Taller Than Most Banners)
No reviews
$24.00

Take a peek into real bachelorette weekends! Read their itineraries, see where they stayed, what they wore and more!

The Perfect Itinerary for a Chicago Bachelorette Party

END_OF_DOCUMENT_TOKEN_TO_BE_REPLACED

You have no items in your cart